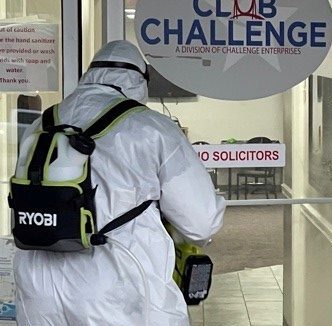 “Problems do not occur in isolation and neither do solutions” 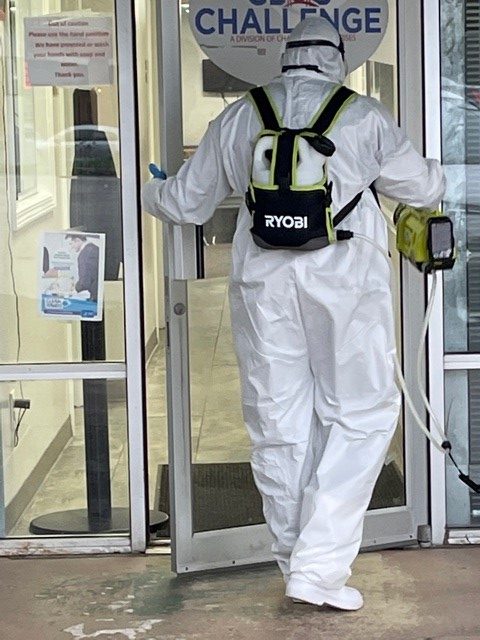 When positive COVID-19 cases began appearing in Northeast Florida in February of 2020, the staff at Challenge Enterprises not only recognized the potential health threat to agency personnel and customers, but also the threat that a pandemic posed to keeping businesses open and employees on the job earning a paycheck to support themselves and their families.

To meet the threat, Senior Staff committed to building a capability to respond to COVID-19 exposures at government and commercial customer locations. The capability had to be a service separate from existing contracts, had to be mobile, and had to have the ability to respond rapidly throughout the agency’s operational territory.

When the recruiting call was broadcast to over 300 employees working AbilityOne and Commercial contracts, more than a dozen employees volunteered to serve in what would ultimately be called – The COVID-19 Response “Tiger Team”.

After a rigorous course of CDC safety training, chemical and equipment training, decontamination training, and drills and exercises the Tiger Team was ready for deployment when it received its first call from the United States Probation Office at the Bryan Simpson Federal Courthouse in Jacksonville Florida, on March 12, 2020.

Seemingly overnight, word spread of the Tiger Team’s capability and rapid response time.  Before long, they were receiving calls from the Department of Navy Commands in Florida and Georgia. In fact, the Naval Facilities Engineering Command (NAVFAC) recognized the importance of the Tiger Team’s capability that it issued a $750,000 Blanket Task Order to have funds readily available when needed to support the service.

Since its inception, the Team has responded to many other Federal, State, and Commercial agencies including the Department of Justice, Internal Revenue Service, Department of Labor, General Services Administration, Army Air National Guard, and other commercial businesses in Jacksonville, Gainesville, Ocala, and even Orlando Florida.

To date, the Tiger Team has responded to 147 individual COVID-19 contamination calls logging more than 1,200 Direct Labor Hours providing a source of high wages to the members of the team.

While some government agencies chose to close their doors to reduce the risk of exposure to their employees, we strongly believe our AbilityOne and Commercial customers remained open thanks to the heroic efforts of our Tiger Team coupled with the enhanced safety measures we have employed since this Pandemic began.